A downloadable game for Windows

NOTE! You can only quit with ALT-F4, this was clearly a rushed University assignment...

Massively Single Player Retro RPG (or MSRRPG for short) is a university project I did in 2005 over the period of 2 months (around other university work).

It was a parody of what annoyed me about standard Role Playing Games, which were only becoming more and more popular at the time.

The list of things parodied in this game are;

There IS an element of tedium involved, but this is tongue-in-cheek, and if you pay close attention, you'll spot people that you can come back to who will always give you the full name or part of the name of the next person you need to speak to, which will speed things up greatly.  Also there is a large library of text that is selected from randomly with each playthrough, which includes names, types of things that people say, objects, etc. So you should see something different each time.

The "tutorial" is all in text form, be warned, but it was a small scope University assessment, keep that in mind, so I didn't have the luxury of time of utilising the latest in game design concepts!

There IS a nice pay-off at the end, if you can make it.  If you're a fan of MS-DOS games, you should get the reference immediately.

HINT: If  you're surrounded, each time the old man talks to you, there's a chance you might be able to bust out of the horde if you button mash enough.

ABOUT: I made this in 2005 in my 20's for a university assignment. It was made in C++ in a custom 2D engine made my my professor (Dale Freya) which he titled "Clarity". It used Glide and FMOD and a free graphics library called DeviI. I wanted to really go retro with the underlying system, and all collision, even the moving sprites, is done on a tile grid.  The visual part of the map is one giant image (I know, not so retro, but time constraints...) and the collision for the map is stored in a simple text file.  You can find this in the "data" folder.

"background.txt" is the collision and if you open it in a text editor and maximise it (so it doesn't wrap) you can guess at what's going on .  T tiles is for town, I think the only reason they exist is to give the NPCs somewhere to spawn.  Each tile represents 16x16 pixels.

"data.txt" is basically all the other info in the game, including all the random text strings, entity type settings, etc.  You might recognise some of the names from my favourite video games or cartoons.  I also threw in the names of my friends at the time too. 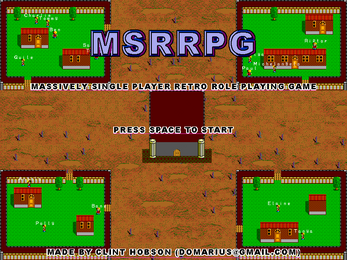