CONTROLS:
Click on the game window, and press Z to start.
X = Menu, Up = Jump.

Watch a full video playthrough here to see all the game's content!

"After Miracle, Techno, and Shinobi, Alex has found yet another world to adventure in, Pico 8 world - and it wasn't easy! Cramming yourself into a world which only exists inside an 8192 token limit is no mean feat! But that's no problem for Alex's mean fist!"

What made it in:

What was cut to make room in Pico-8:

For a limited time, I'm doing a promotional offer: If you register your email with me to get updates on my new games, as a special thankyou from me, I'll send you a free Steam key for my family friendly, local multiplayer game HopSquash!

Savage Steel is a local co-op, hack & slash adventure for up to 4 players. Check it out on my site and register for updates. 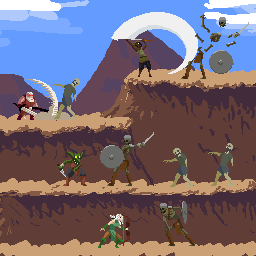 Find out more about the hurdles I overcame to fit this game within Pico 8's limitations. 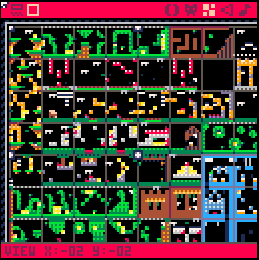 First things first, this is a super impressive effort, and I enjoyed trying this out. As someone who played Alex Kidd since childhood, it's fun to see what changes needed to be made to make it all fit within Pico's constraints. That said, if you're as used to how the actual Alex Kidd works as I am, it kinda starts working as a detriment; there are so many things I'm used to in the original game that caused me to die in here. Things like the merman enemy having mercy invincibility, several ?-blocks containing ghosts that would've otherwise had 1-ups, the Janken games being actually randomised instead of a set sequence, and finally going Game Over at the Ox boss because it doesn't stop after being punched. I'll keep trying, though! Again, it's a fun, different way of playing a classic.

Sorry for the delay in reply, I just got through a massive house move!

This is the best kind of comment, from a true Alex Kidd fan. Thank you for pointing out the differences, those are things I missed. I like to think if this is the list of differences, then I must have come pretty close!  Sorry about the missing 1-ups, my only logic was that the ? blocks had a ring in them, unless you already had the ring, in which case it's a ghost. That's the only behaviour I noticed in the original, so that's how they all behave.  Not sure why the merman has mercy invincibility, maybe it uses the same code as Alex Kidd - it was a while ago and I had to cut a lot of corners to get all the code to fit in Pico 8's memory limitations!  Also same with the Ox boss, he re-uses some enemy behaviours because there is literally zero bytes of code left!  It can be done though, I have playthrough I recorded in a single take up on YouTube.

(I understand of course, that as the developer, I'm more used to playing it than a new player.)

But as for the Janken games, there is a trick - it's time based. If you watch closely to the changes they make, you have like half a second to react and change your option to beat theirs before the time is actually up.  I figured this was more of a challenge than them all having the same pattern every time, though maybe I should be more up front about this change in the instructions. It does get a mention though.

As far as the item boxes go, in the original game they actually work kind of tricky: their contents aren't set, but cycle between a set order. So if you skip a ?-box because you anticipate a ghost coming out, it'll actually be in the next one instead. ;)

And yeah, I understand the Janken segments being a deliberate choice, nothing wrong with that, but it does throw off expectations. :)

Haha, all this time I never knew the ? blocks worked like that... and I searched and looked at 3 walkthroughs just now, and even they don't mention it!  But I'll be using this trick next time I play the original.

It doesn't seem too difficult to implement, but I might open a can of worms; one technique I read for getting the most out of the ? blocks is to skip the ghost, by punching the ? block and making him appear, then punching 2 star blocks to make 2 bags of money appear, which causes the ghost to disappear, the way money bags do when there's more than 2 on screen at once. People might be expecting to do this as well.  Adding this behaviour would add more code memory and might not be possible without refactoring even more.  I should probably just update the page to add more specifics on the differences!

I played Alex Kidd a lot in Master System, I loved it. This version is great, it brings back very good memories.

That's awesome. My next door neighbour / school friend had it, and we took turns playing it a lot. He got so good at it, he could get to the last level, but then die on those damn spikes... 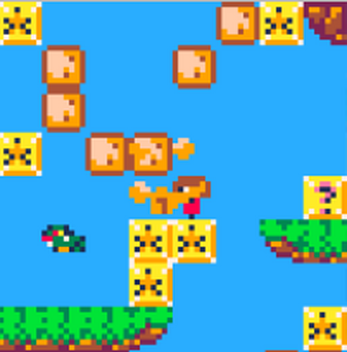